An Interview with Karl Palma of KARLSBALLS 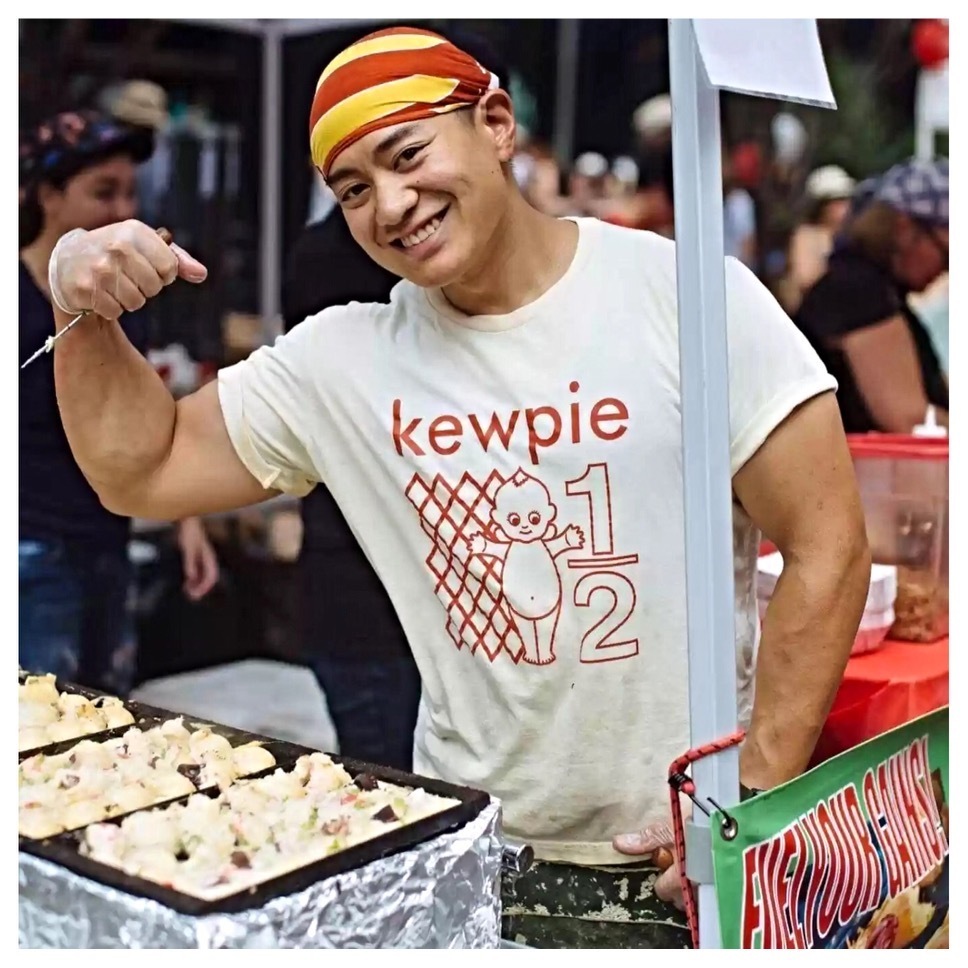 On a brisk April evening in 2015, thousands of New Yorkers gather in a sprawling parking lot outside of the New York Hall of Science in Queens. Long lines begin to form in front of large pop-up tents manned by chefs preparing for the rapid onslaught of hungry attendees of the Queens International Night Market. One such line boasts an up to three-hour wait, but the patrons don’t seem to care; they eagerly await their turn, smiling and chatting with others nearby.  Few attractions justify a three hour wait which begs the question, what could possibly garner such interest and patience from notoriously aloof New Yorkers? The answer is KARLSBALLS, a new takoyaki stand created and headed by Chef Karl Palma. 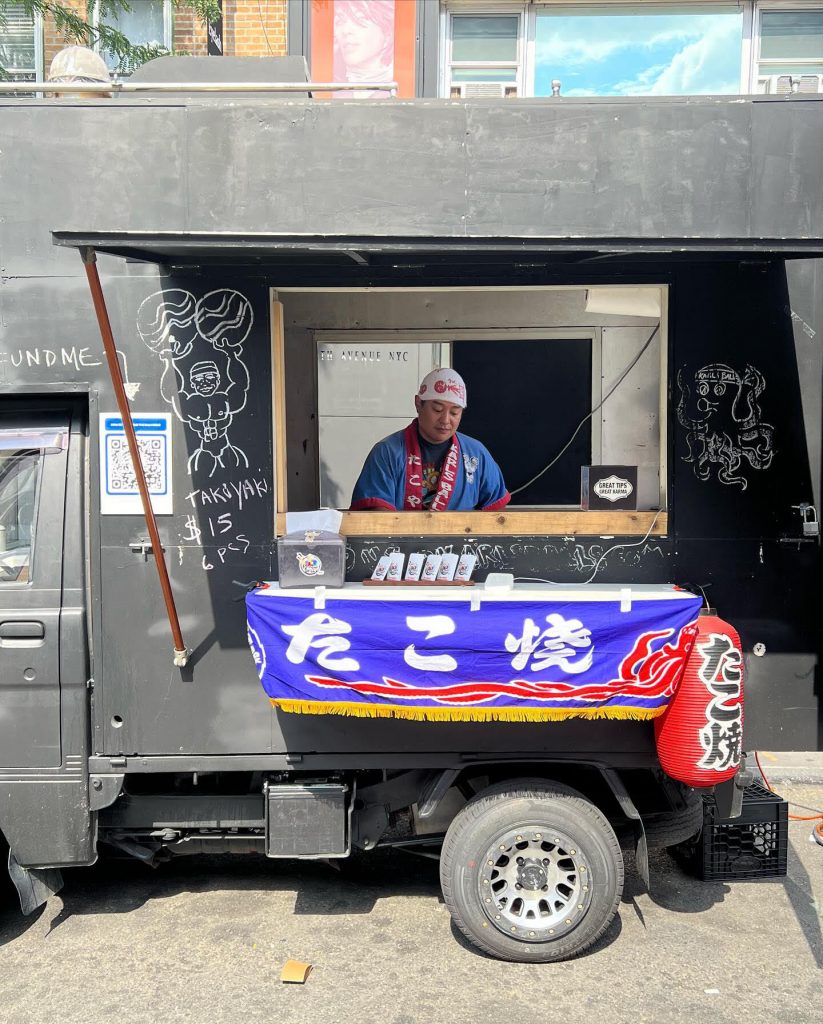 For those who don’t know, takoyaki is a classic comfort food from Osaka, Japan made from a special savory wheat batter cooked in a molded pan of cast iron or copper.  It is filled with octopus, tempura crisps, pickled ginger, scallions, and then topped with a savory Worcestershire sauce, mayonnaise, green laver and shavings of dried smoked bonito. In 2015, Karl started KARLSBALLS with the goal of introducing takoyaki to the masses.  The name KARLSBALLS came about when Karl was cooking Takoyaki on tour with the Food Film Festival in 2013.  Many non-Asian chefs had no idea what he was cooking, but they knew that his name was Karl so they humorously described his dish as Karl’s Balls.  Thus, KARLSBALLS was born.

Since then, the popularity of KARLSBALLS has remained steadfast. Karl has been featured on The Cooking Channel, Vice, CNBC, CBS, and Buzzfeed and has participated in Japanfes, Mitsuwa Market Place, and the Queens International Night Market. Intrigued by his success, we at Kewpie reached out to find out what makes KARLSBALLS so special. After speaking with Karl, it’s clear that his success is derived from his ability to put out an exceptionally high-quality product by employing the massive attention to detail fundamental to Japanese cooking.  At the same time, Karl manages to foster an environment that is convivial and lighthearted making KARLSBALLS well worth the wait.

One would be hard pressed to find a chef more dedicated to their craft than Karl Palma.  Karl’s commitment to excellence starts with his ingredients all of which, with the exception of eggs and flour, he imports from Japan. Specifically, Karl exclusively uses Kewpie mayonnaise for his takoyaki explaining:

“So at the restaurant (I was working at) we would make our own mayonnaise, but it was nowhere  near, it was good but it wasn’t Kewpie.  So, when I launched the business I was first making my own mayonnaise similar to what we used at the restaurant but once I started buying Kewpie and trying it with our recipe it was just hands down better you know you couldn’t replicate that. It was just a win-win so I stuck with it.” 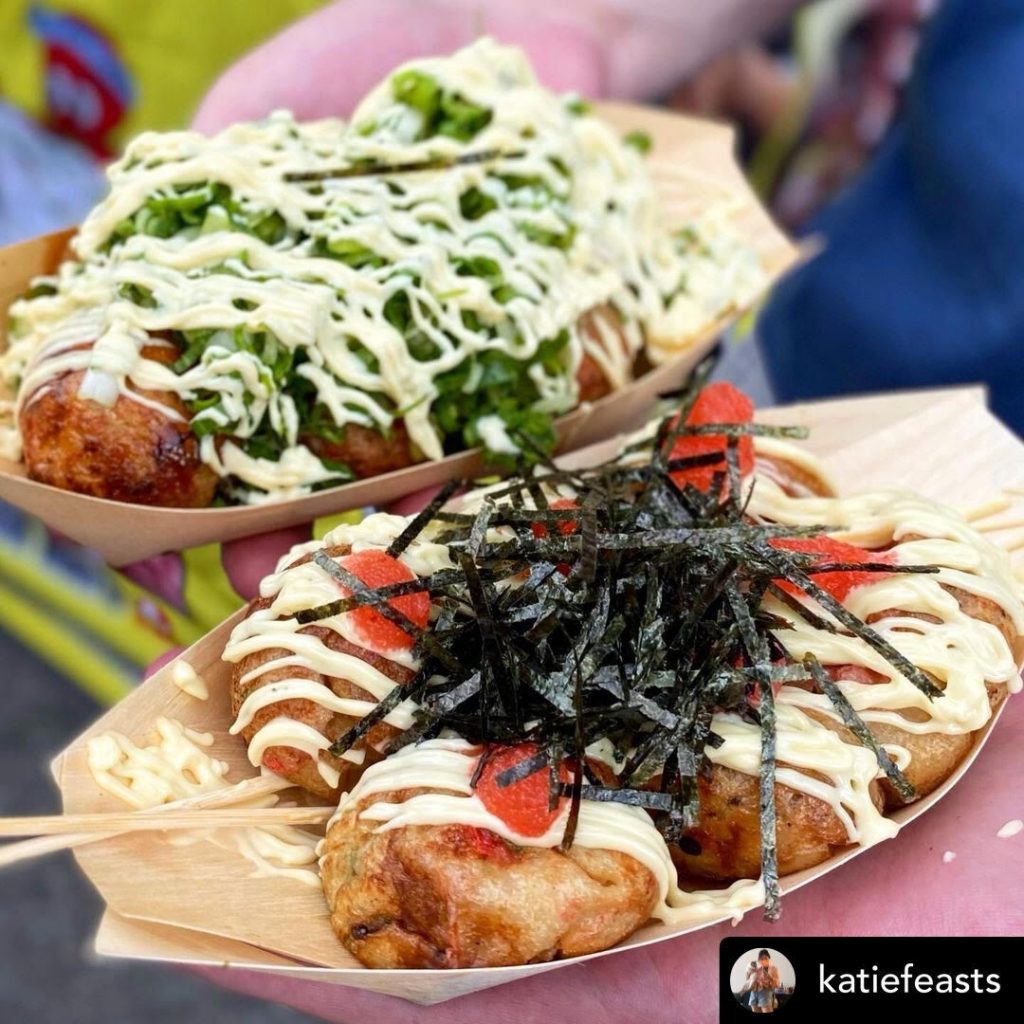 Clearly, takoyaki is at its best when paired with Kewpie mayo.

It’s not just the ingredients that sets KARLSBALLS apart from other takoyaki, but his cooking method as well.  Not one to cut corners, Karl insists on doing a test batch before each service so he can adjust his recipe based on the elements, “Cooking outdoors is tough, depending on how hot it is outside, there’s wind, there’s humidity…if it’s very humid we have to adjust the batter because there is going to be more water content in there and that affects taste…”

Karl’s attention to detail is apparent in his prep as well.  He spends his free time translating manuals from some of Japan’s top sushi chefs into English in order to study their methods.  His meticulous preparation includes an up to one-hour hand-massage for each octopus, “I do this crazy sushi-style prep which is the same prep that I found out in my research that all of the best sushi restaurants in Japan and the States do. I hand massage the octopus for up to an hour, it’s then boiled in a specific way—it’s like a three-day process.  Most sushi restaurants here probably only massage maybe 1-2 octopus per week for sushi, but we’ll do about 15 in one day by hand.”

Karl’s dedication to his craft speaks to his appreciation for the culinary phenomenon of Osaka-style takoyaki, but it does not come without a cost.  Like others before him, Karl suffers for his art and deals with arthritis in his neck and spine resulting from his hands-on, highly technical prep and has been hospitalized for exhaustion related illnesses. It’s not all for naught, though.  One taste of Karl’s mouthwatering takoyaki proves his method is undeniable. But as those in the food service business know, mastering the recipe is only half the battle. The other half is spreading the good word, and Karl has that down to a science.

Despite being all business when it comes to his recipe and preparation, Karl definitely has a sense of humor when it comes to marketing (not shocking, considering his business is named KARLSBALLS) and he is just as dedicated to creating a fun and memorable experience for his customers as he is to making extraordinary food. As Karl explains, “Japanese cooking is very serious, but part of Osaka culture is very fun.” And fun is definitely endemic to KARLSBALLS.  Whilst waiting in line, customers hear Japanese Speed Metal reverberating through giant speakers, a far cry from the mellow Bon-Odori music that typically dominates Japanese food festivals.

If the music sets the tone, the TVs take it up a notch.  Karl treats customers waiting in line to Gaki No Tsukai, a reality show created by a comedy troupe from Osaka that is essentially the Japanese equivalent of Jackass.  The personalities of Karl and his staff only add to the atmosphere. One of Karl’s employees, who he describes as being like family, does his best “salt bae” impression whilst sprinkling green onion over the takoyaki.  The camaraderie is palpable, and enhances the environment fostered by Karl.

While the exciting atmosphere may help draw customers in, it’s the quality of the food that keeps Karl’s takoyaki in such high demand.  He strives for nothing short of perfection, as demonstrated by his usage of quality ingredients, including Kewpie Mayonnaise, and his Michelin-star level prep rarely done for street food. There are a few notable factors that drive Karl’s quest to make the perfect takoyaki. First is his strong desire to expose American diners to this traditional dish from Osaka.  It’s an endgame he reiterated throughout our conversation saying,

“The whole goal of the business is to inform and educate people on the takoyaki of Osaka Japan. And not just the takoyaki but their fun, the humor.  It’s kind of a bummer… People know ramen and have access to great ramen and of course you can get really good sushi in the states. But takoyaki in the states 90 percent is frozen and deep fried and it’s a bummer that people have been programmed to only eat takoyaki like that. So people come to my stand and they get their mind blown…My number one goal is to share authentic Osaka takoyaki to more people.” 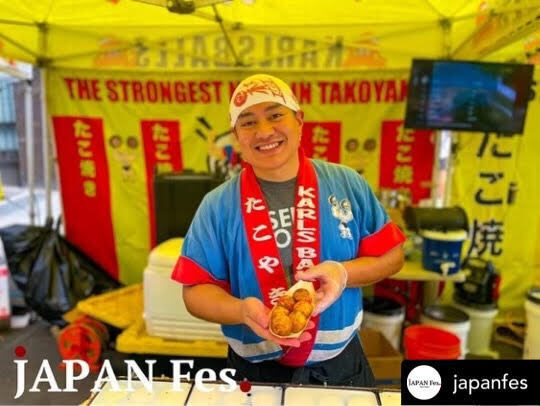 Finally, Karl is simply driven by a love of good food, “I’m one of those guys where if I go to a restaurant and the food sucks it ruins my day. It’s not just food to me. I don’t want that for my customers so I strive to use better ingredients and research to make it better and better and better.” That is a sentiment we foodies can all get behind.

For more information on Karl Palma and where to find his takoyaki, check out karlsballs.com or follow him on social media